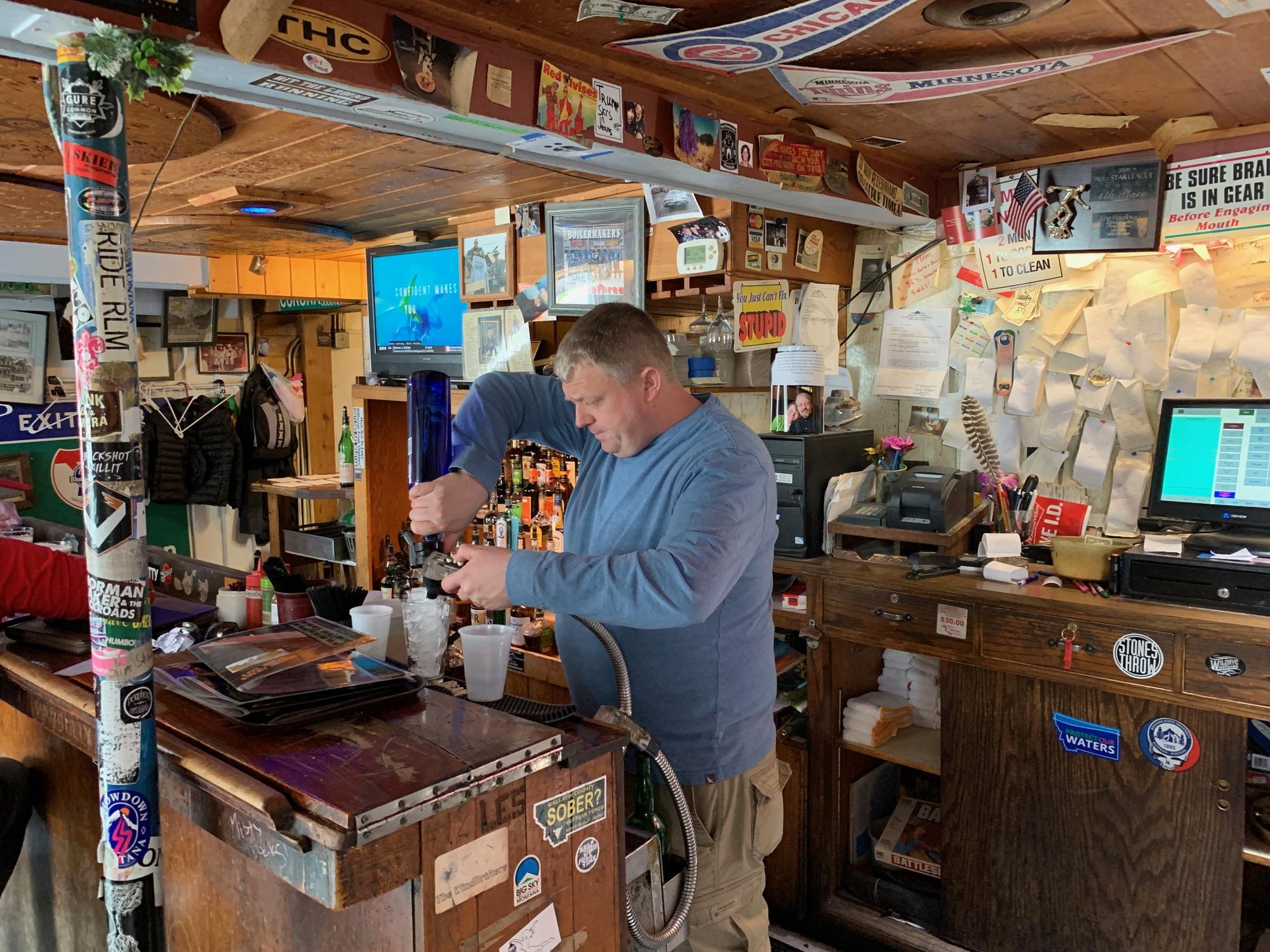 A Little about Us

My name is Don Frye and my brother Bill and I run the Haufbrau with our mom Cyn Frye and our dad Don up until his passing about 2 years ago. My dad purchased the business in 1969. As our regulars like to remind us, we are the new guys that have only been working here for 20 plus years. Last week Sheryl from the walking history project asked if we would be comfortable being considered a “dive bar” and my answer was yes. Upon thinking this through a little more I thought maybe I should at least learn the etymology of the term “dive bar.” The origin of dive comes from the old English dufan meaning to dive or sink and Germanic dyfan to immerse. The term ‘dive’ first appeared during the years of Reconstruction following the Civil War where these drinking dens or other disreputable places were found in cellars and basements where clientele could “dive” in without observation and or judgment from the more moral members of society. The urban dictionary defines it as “a well-worn, unglamorous bar, often serving a cheap, simple selection of drinks to a regular clientele.”

I think the Haufbrau would fall into most of these categories and I know for a fact ‘dive’ is probably the nicest things most of the neighbors have called us. While we are above ground it provides a sanctuary for the whole spectrum of Bozeman’s population. As the community changes and reflects the growth of the city of Bozeman the Haufbrau remains more or less the same as it has since its genesis in 1961. My dad grew up in a small town that is now a suburb of Nashville Tn where his family roots reached back to the early 1800s. The town square was the mecca for information, gathering and family events. When he moved to Bozeman with my mom in the early 1960s there was no town square and no family so after trying his hand at many occupations he created his own extended family and his own community center where people could come to celebrate, grieve and share news or gossip. He never met a stranger in his nearly 50 years at the Haufbrau.

Before I begin the history of the Haufbrau I will quote a saying that my dad was fond of which has proven to be very accurate over the years, that one should believe half of what they see and none of what they hear, so please understand these are stories as they have been passed down and I am sure there has been some dramatic embellishment. The building started out in the 1950s as Watsons drive thru, a hamburger joint. Next time you are in you can see wehre the two shuttered windows on the west end of the building served as pick up windows. It became the Haufbrau in November of 1961 with the help of the Olympia Brewery who was looking to sell more of their products in the area. There were two selections of beer, Oly and Oly Dark. My dad always gleefully told the account from another long term Bozeman resident of how our corner was used by a local church in the 1920s or 30s as a big tent revival site where people would come to be saved and watch miraculous healings. He always thought these revivalists would probably be spinning in their graves with what we have done to undo all of their hard work towards salvation, but he always figured we were saving people in another fashion.

While the Haufbrau is a worn old cinder block building every item hung on the wall, suspended from the ceiling or stuck to the cooler doors means something to someone, a sort of living timeline of the history of the bar and the community of Bozeman. The Haufbrau started putting table tops out for each graduating class from MSU in the spring of 1962 and there are tabletops for most years through last week’s graduating class. The tables have the year cut into them and various names, illustrations and messages carved into them. The table tops adorn the walls, the ceiling and most of the limited open space. It has been neat to watch as generations of alum come back to find their names, the names of old friends and the memorialized names of who have passed away. We are seeing more and more legacies where a family is dropping off a new student or attending a graduation and the parents find their names on the classes from the 1980s and the grandparents find their mark on the tables from the 1960s. It is neat to watch as the memories flood back and after a few beers the debaucherous stories start to come out. Everyone seems to have at least one favorite Haufbrau memory or story.

The foot rest at the bar is made from old rail from an ore cart track that went deep into a mine somewhere in the Madison Valley. There is a bobcat mount on the back wall given to the bar by a former janitor who lost his hand in mining accident in Butte. Francis would fight anyone with one hand but watch that stump, it was a crusher. He had no use for the Butte unions as they would not pay for his medical care following the loss his hand and he proudly drove his old ford through the picketing miners to go to work not even slowing for them to get out of the way. There is a montage of womens softball pictures from the 1960s with an old Haufbau jersey, championship title stars and a bat. Don ‘jiggs’ Speith was the coach and an MP for Englands Royal family during the second world war. The bat boy is now in his 60s and still around town. The picture of the Venus on a wave in the southeast corner is a painting from a junk store in Butte painted by an artist whose nudes adorned bars and brothels all over the northwest. She has piqued the curiousity of generations of young boys in Bozeman and was the first nude woman many of us ever saw as children. An adult tricycle hangs from the ceiling as per the last request of a swamper who died of cancer. He needed the extra wheel to compensate for his thalydimide crippled arm and always felt the Haufbrau and its regulars were family. There are numerous framed pictures of employees and regulars, some that left us far too young, some that exited from good living and some departing on their terms when it was their time. These are just a few of the many things that tell parts of the story of the Haufbrau and the city of Bozeman.

The cross section of customers is varied and wide and it is these people that make the place what it is. The building is just the vessel but the people that come through the door are what makes it unique. Since the early 1960s a group of wildlife biologists from MSU have come in every Friday at 4pm for their Friday seminar over pitchers of beer. I do not know how many hundred years of experience they share amongst them but I know they have forgotten more about Montana wildlife, hunting, fishing, and rock hounding that most people will know in a life time. There is a core group that comes in every day at 4 o’clcock to discuss politics, art, music, food or anything else that may happen to come up. Every good Friday the ladies of Thrive, a local nonprofit, hosts a pickled egg fundraiser where everyone makes their secret recipe pickled eggs and participants and customers vote for their favorite recipe. We also have a very active music community and I think are the only spot in town to offer live music 7 nights a week. We consider ourselves fortunate to work with so many talented musicians in Bozeman.

My dad always told us that if you take the time to listen to people, get to know them, their name and what they drink, everyone has a pretty interesting story and as Bill and I are both proof you can learn something from even the dumbest guy in the bar. I think that places like the Haufbrau become even more important during these times of explosive population growth and constant changes around Bozeman as people crave something familiar and the same. With the rampant use and availability of social media and technology people need now more than ever a place they can step back in time and see and visit one another face to face, a real conversation in lieu of a text or email.

In conclusion, while we may fit the mold of a dive bar with graffitied restrooms, decades old patina on most surfaces and peanut shells crunching beneath your feet, know that this old building is so much more. I can only imagine how many relationships have begun and ended, how many births have been celebrated, how many loved ones mourned while friends and family were comforted, how many friendships have been spawned and how many hangovers have been created within these walls. If you are looking for an experience that is uniquely Bozeman that steps out of the sterility of normal, number 16 on buzzfeeds best college bar list and voted most romantic place in Bozeman by Bozeman’s Own Magazine in 2016 come down and see us. In conjunction with Craft Beer Week, tomorrow we are sponsoring a burger and IPA event at the Haufbrau. Beneath the crusty veneer of the dive is part of the heart of Bozeman.